I read an article last week about Facebook founder and CEO,  Mark Zuckerberg. It said that every year he focuses on one thing to “better” himself.  For example, in 2009, he wore a tie everyday. In 2010, he learned to speak Mandarin. In 2011, he vowed only to eat meat he had slaughtered himself. In 2014, he promised to write one a thank you note a day. Some I thought a little odd (for example, I’d rather be a vegetarian than slaughter my own meat), but I found his thank you note resolution to be heart felt and caring, especially in an era in which I consider an e-mail (as opposed to a text) to be a formal, personal form of communication.

The same week I read about Zuckerberg, I also came across this company: The Gramr Gratitude Co. . They have thrown their hat in the subscription box ring with an aim to rejuvenate the art of the hand-written word. For $45/quarter you get 4 correspondence cards, 4 square cards and 4 postcards with the necessary postage and some goodies to throw into the envelopes. Just enough to send one card a week for 3 months. For an extra $10 per box, they’ll add 4 cute cards for your kids to mail, too…start early to instill good habits.

I’m into it. I love receiving snail mail and feel like this would encourage me to pay it forward. So watch out Zuckerberg, I just might pull a Winkelvoss and steal your idea too.

Not ready to commit to one a week? Here are some cute single cards that will get the job done: 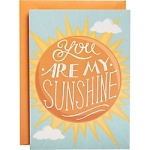 2 thoughts on “perfecting The art of correspondence”