Last Tuesday night me and 8 other people met in a small record shop on Cherokee Street with a common mission: to learn how to cross-stitch. And we were brought together by Dabble. Dabble, founded in 2011, is an online marketplace for DIY classes that teaches everything from soap making, to beer brewing, to how to install wainscoting. Classes are a few hours in length and cost about 40 dollars, with the idea that you get everything you need to know in just one class. One and done. Sign me up. 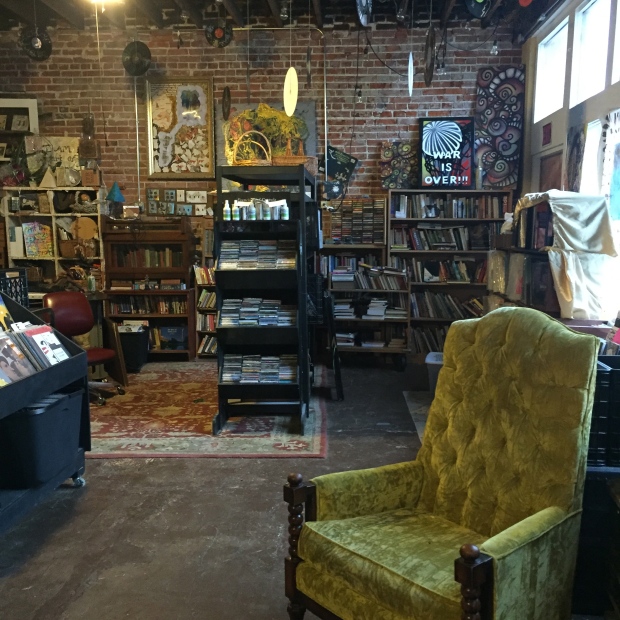 The inside of Kismet Records – a record store and gallery space that also hosts concerts (and is it me or does it look like the set of High Fidelity?)

And so that’s just what I did. I learned the basics of cross-stitching in person by Sonia, creative director of Kismet Creative Center and also an avid cross-stitcher. Sure I could have gone about learning this skill via You Tube video or found a book at the library, but there was something about trekking to this new space and meeting these new folks to simultaneously learn this new skill that was cool and communal. It’s also part of Dabble’s mission: to help raise awareness of local vendors and venues while creating community involvement. Sonia feels it too, saying a huge reason she teaches these classes is to see the community come together for the sake of art. It was a real kumbaya moment.

All of the supplies were provided, including the hoop, fabric, font books and thread.

By the time my 2 hour class was finished, I had a nearly completed project.

Dabble is headquartered in Chicago, but offers classes in tons of cities nationwide. Here is their website with a list of upcoming classes in St. Louis. Pasta Making at Sidney Street Cafe and Airbrushing 101 top my list. Who’s in?

2 thoughts on “a little dabble do ya”