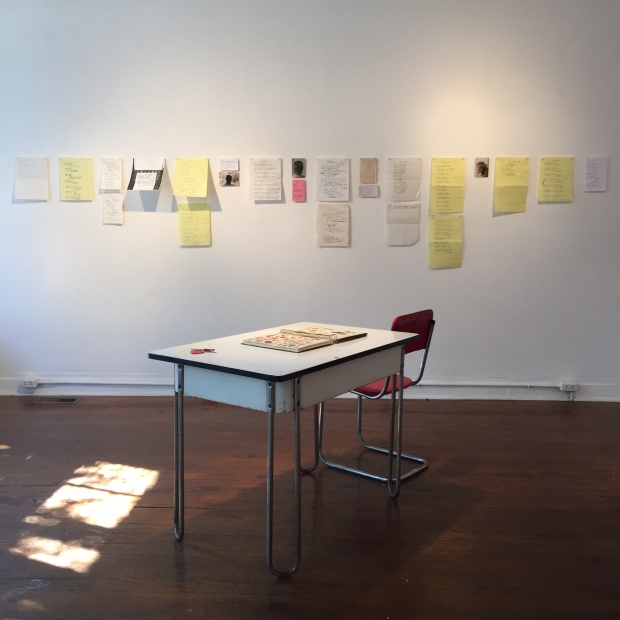 A vintage desk littered with a sticker book and keys- what looks random and haphazard is really carefully thought out art in Fort Gondo.

On the Westernmost section of Cherokee Street, between Michigan and Compton, sits a very tiny and very unassuming gallery called Fort Gondo. It’s right next to its sister space, Beverly Gallery. Open since the early 2000’s, both are original fixtures on the street and somewhat responsible for the movement of the art scene to Cherokee, as we know it today. When I stopped in last Thursday (you have to plan your visit strategically, as they are only open Thursdays and Saturdays from 12-4) I found the most unusual exhibit that is most definitely worth sharing.

The space reads very much like a residence: exposed brick, small rooms, a bathroom visible from the entry.  The exhibit is called Time and Fragments and is on display until October 1st. It showcases new sculptures by Chris Thorson surrounded by the handwritten poems of Joanna Mc Clure.  Inspired by McClure’s poetry, Thorson created a space full of common place objects, strategically arranged and organized. I think the gallery brochure says it best, in describing the exhibit as “poetic jottings and uncanny replicas of ordinary stuff.”

Put it this way, there was a tiny, seemingly “ordinary” used ketchup packet lying all alone near one corner of the space. Had the curator not been with us, I might have picked it up to throw in the garbage, thinking it was trash. But after she pointed it out and I took a closer look, I could indeed tell it was made out of plastic and hand sewn and hand painted to resemble the iconic ketchup packet. Ditto for the popcorn kernels littering the bed, a lone M&M on the floor, a container of potatoes atop the fridge (really made out of clay) and the sticker book that was cast out of metal and filled with hand painted homemade stickers. It was an artistic collision of the real and the faux.

A ketchup packet, resembling that you’d get in McDonald’s drive thru but when it’s hand made, hand sewn and hand painted = art. 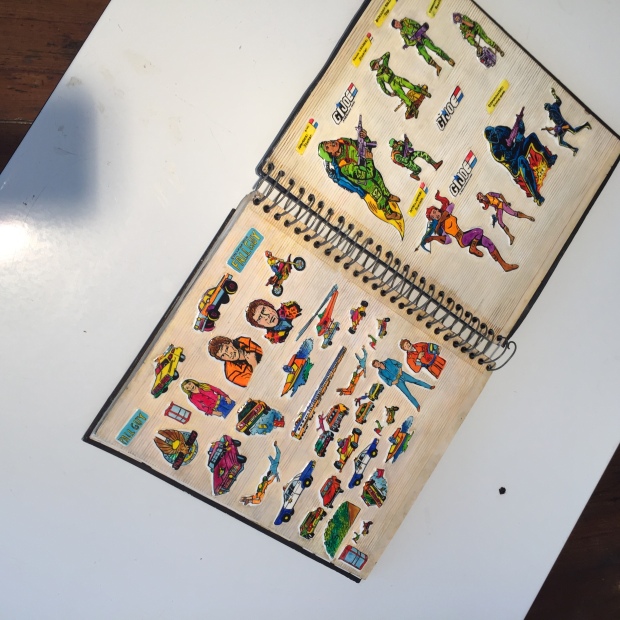 If you are in St. Louis, this place is worth checking out for the sheer uniqueness of the exhibit. Here’s my recommendation: visit the gallery, stop to view the small-scale print show next door at the Beverly Gallery, then take a look in neighbor Style Vines (a local shop where you can buy all sorts of unique, cool, St. Louis apparel and decor) and finally stop in Flowers and Weeds, an adorable flower/garden shop on the corner. What else were you going to do on a Thursday afternoon?

One thought on “define art”