Last month, as part of St. Louis Design Week, I attended an event called DART. Aimed at raising awareness for neighborhoods and areas around St. Louis, perhaps the DART website summarizes it’s objective best: “By the mere act of photographing, things that were unknown become captured, understood, and made personal. By experiencing new areas and meeting new St. Louisians, we can see more clearly the hope and promise of our own neighborhoods and our own neighbors.”

DART attendees buy a dart or darts (money raised is donated to a local charity), then throw them at a huge map of St. Louis that has been projected onto a cork board. Wherever your dart lands is where you are then charged with photographing. Everyone reconvenes at a later date after submitting their photos for printing.

It is a cool concept that certainly rung true in my case. I threw my dart at the intersection of Flora and Tower Grove. An area where I had been, but never really BEEN, you know… to actually get out of the car and walk around. The intersection borders the Missouri Botanical Gardens and is just south of the popular Olio, Choquette, Union Loafers corner on Tower Grove Ave. When I did finally step foot out of my car to take my photo, I realized I had hit the DART jackpot.

Take a look at this: 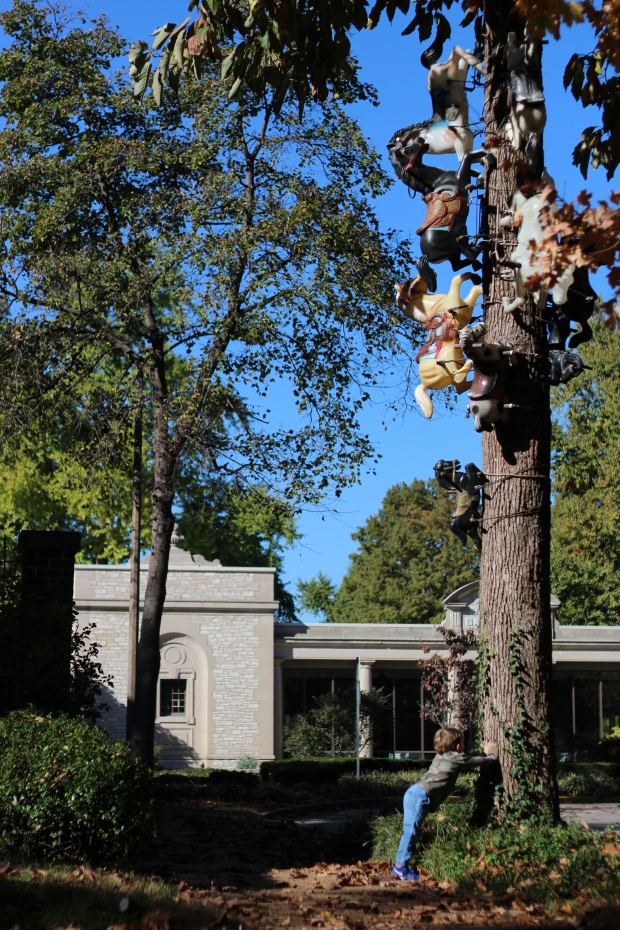 Rocking horses fastened to the tree! What the…? Is it art? Is it a joke? How long had it been there? Who is responsible? Well, in typical 21st century fashion, I (as the DART motto had hoped) met some new St. Louisians thru Instagram, where an acquaintance randomly posted a similar photo of the rocking horse tree the very next day. Then, one of her friends chimed in to say that she grew up on the street (Flora) and one of those rocking horses was hers as a child and this “installation” had been there for a while. I am hoping more clues are unveiled when I go to the DART gallery opening, but if you have any scoop on this mysterious corner in the mean time, please comment below!