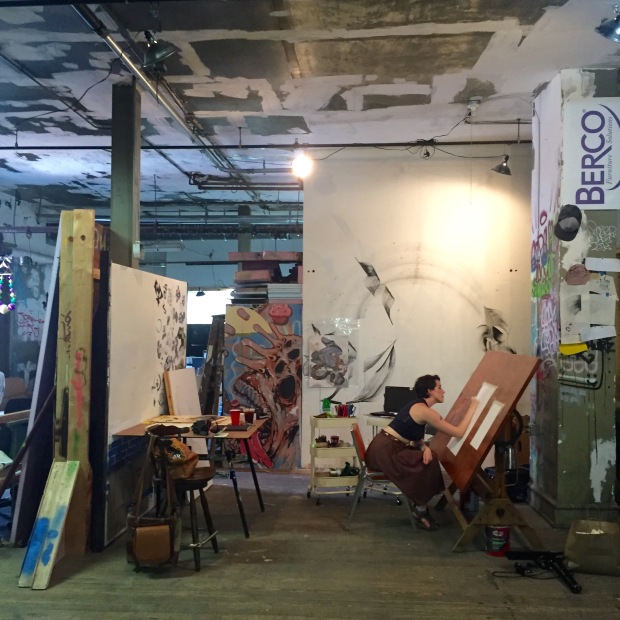 Marx at work in her Cherokee Street studio.

Lauren Marx grew up wanting to be a zoologist. When she realized that profession also came with a lot of biology labs and science classes, admittedly not her strong suit, she had to regroup. Which is how she ended up with a B.F.A. from Webster University. This fine arts background, coupled with her love of animals, are partially responsible for her successful career as an artist, one who specializes in self-described “gory animal prettiness” to be exact.

The other part responsible for this burgeoning art career? Her family. For one, Marx comes from a long line of artists, a great-grandfather who was a painter, a grandfather who was a printmaker, a mother who was an artist. Said grandfather not only gave Marx the artistic gene, he also influenced Marx’s subject matter – whether he knew it or not- because his dining room was adorned in the work of John James Audubon. Marx would stare at these prints as a child and file them away for future use.

Audubon, in case you aren’t familiar, was an American naturalist and painter and the first person to create an illustrated natural history book, specifically known for it’s detailed illustrations of birds in their natural habitat. This gained him fame and notoriety in the late 19th century and is why his is the name behind the Audubon Society, an organization dedicated to wildlife conservation that was incorporated in 1905.

Audubon’s work still plays a role in Marx’s art. Some vintage Audubon prints that she found in an antique store on Cherokee Street are stacked neatly on her desk, serving as inspiration. Evidence of his style is apparent in the composition, details and color palette of Marx’s work too. Like Audubon, her work is very intricate and anatomically accurate, but instead of birds being perched on a branch somewhat wholesomely, as Audubon painted them, Marx depicts her animal subjects eating their prey, blood and guts also shown in all their natural glory.

Regardless of how you feel about the somewhat macabre subject matter, there is no denying that Marx has an incredible talent and imagination. She studies hundreds of pictures of animals before embarking on a piece, to ensure the perspective and scale are correct. Then she is meticulous about adding those uniquely animal characteristics: fur, scales or feathers that make a piece take on a very life-like quality.

And as for those artists who have different phases or periods to their career? Not Marx. At least, not yet. Ever since her Sophomore year of college she’s been drawing what she describes as these “dark animal scenes” using the exact same tools. The detail she incorporates into her work is extensive and I assumed this effect was gained from colored pencils or maybe even a computer printer. But it is indeed all hand drawn and is the product of ink pens, what Marx explained to me as colored pencils that are then painted over with water to give the medium a water-color effect. 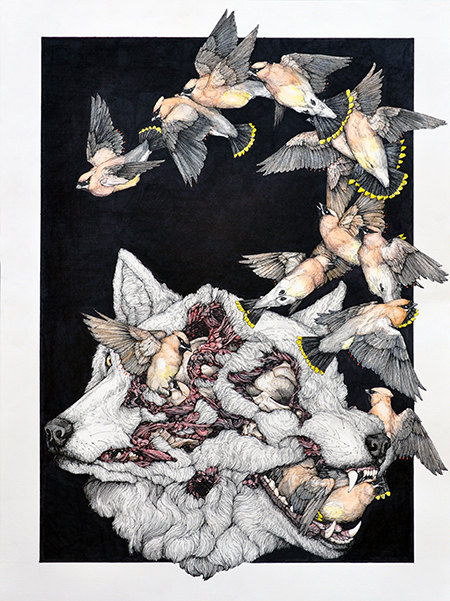 Samples of Marx’s works. All are available here.

As I learned thru our chat, Marx is a bit of a perfectionist (evident by her impeccably realistic work) and a neat freak (evident by her impeccably clean work space). These pencils fit her personality perfectly, as they can add detail and dimension, without the mess and lack of control that would come with a paintbrush. The ink pens are used in conjunction with a fairly traditional black ball point pen to add further detail and help highlight the animals.

Marx has been a full time artist since graduating in 2014. When asked where she gets her inspiration and ideas for all these images, Marx says that “they come to me in dreams or while I’m in the shower.” But she added that this inspiration isn’t always guaranteed and admitted the creative struggle she is up against, like many in her field. For example, after a big show in LA last November, Marx was facing yet another deadline and pressure to create new pieces for an upcoming show. She had trouble finding inspiration and went thru a creative drought that lasted almost two months at the beginning of the year, where she failed to make a single piece of art.

That era has thankfully passed, as Marx is busy working on pieces for an upcoming show in Portland. It is an era of new-beginnings of sorts, as just two weeks ago Marx moved from her in-home studio downtown St. Louis to the arts-centric Cherokee Street, just south of the city. There she shares studio space with many of the artists who make up the Screwed Arts Collective, a St. Louis- based artist group known for their large scale installations. While Marx isn’t a part of this collective, she loves the camaraderie of being surrounded by artists and says she is much more productive since leaving her home-studio. Finding fewer distractions, she often works long into the night. 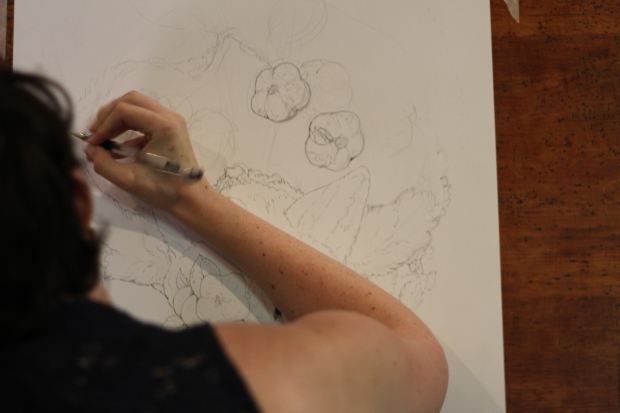 The start of a piece Marx is working on for an upcoming show.

To say that Marx has found a niche with her art is an understatement. Aside from her hundreds of thousands of adoring fans on Instagram and Facebook, she has shown in galleries in LA, Seattle, and of course St. Louis. I’m pretty sure that somewhere John James Audubon is admiring her work.

Currently, Marx’s work can be viewed at Tech Artista in the Central West End, where she is one of twelve local women artists that comprise “Burning Bright,” an art show put on by HEX and Living Collective. It will be on display until June 16th and is free and open to the public. You can read more about Burning Bright here.